What is Winging of the Scapula?

The shoulder blade is a mobile structure, which is stabilised against the chest wall by a large number of shoulder muscles (Muscles of the shoulder girdle) working in tandem with each other. If this harmonious interaction between one or more of these muscles is disturbed, it can result in the shoulder blade becoming excessively prominent over the back, which is referred to as 'Winging of the Scapula' 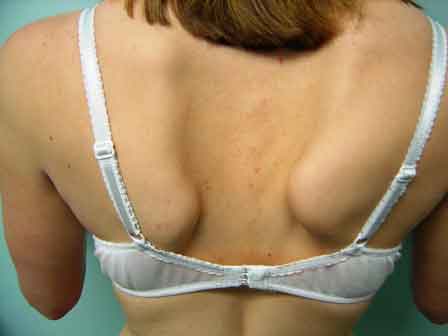 The winging may be the result of simple changes in shoulder mechanics as a result of conditions such as impingement or instability or more complex problems such as nerve or muscle dysfunction resulting in poor control and stability of the shoulder blade.

This is one of the many conditions that can lead to marked winging of the shoulder blade with significant loss of shoulder function. Facio-scapulo-humeral dystrophy causes muscular weakness of the face, shoulder girdle, and upper arm with selective sparing of the deltoid muscle. This leads to scapular winging and a marked decrease in flexion and abduction of the shoulder. As the muscles stabilizing the scapula become involved, the scapula starts to 'wing'. The deltoid is spared, but its action is wasted because of the unstable scapula. The deltoid contracts and the arm attempts to move in a normal fashion, but because the scapula is no longer stable, it wings and rotates under the forces of the long lever arm of the upper limb and scapula complex.

Mechanical fixation of the shoulder blade to the chest wall provides a stable fulcrum on which the deltoid can exert its powerful action on the humerus and abduct the arm without rotation of the scapula. Treatment of the patient with muscular dystrophy is best accomplished by a multidisciplinary team from neurology, genetics, psychiatry, orthopaedic surgery, physical and occupational therapy, and medical sociology. Optimal therapy should be prospective with a thorough approach to total treatment. The majority of orthopaedic intervention is confined to the rare facioscapulohumeral dystrophy, in which shoulder weakness occurs early and can interfere significantly with upper extremity function. At an early stage, facioscapulohumeral dystrophy affects tasks of repetitive use requiring abduction and flexion of the shoulder, even in such simple daily activities as overhead dressing. 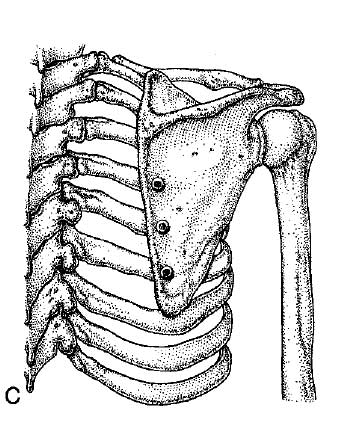 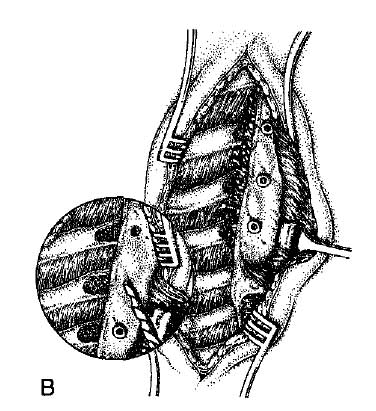 following the Thoracoscapular Fusion and for the first 3 months the patient MUST wear a brace (similar to the one pictured below) all the time to support the arm weight and protect the fusion until solid bony healing take place. 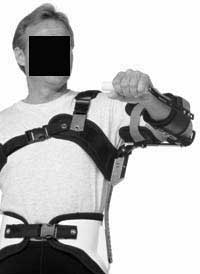 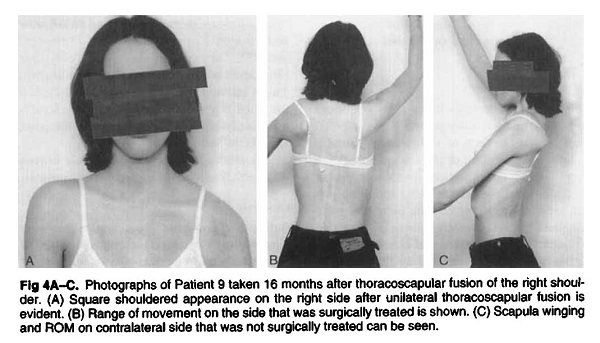